There are rare moments in the exhausted life of a mother of four young kids when the light shines down from above and there is affirmation that I might actually be doing something right.  When I brought this week's share to the van and the kids started riffling through it, shrieks of delight over, "YES! KALE!" and "PEAS!? TWO kinds!?!!" and "Are those beets!? BEETS FOR SUPPER!" I decided that in at least one part of their lives, I'm not entirely messing up.  :)  Thanks Jen, for making me look like a good mom to my kids.  haha!

My own personal shriek of delight came when I saw the cilantro.  It's a true love/hate food and I'm planted firmly in the love category.  I'll save my favorite cilantro recipe for when the tomatoes come on, but that pretty green bouquet had me inspired to make a stir-fry with Cilantro Lime Rice.  If there's something that cilantro loves, it's citrus.  And curry.  Or both.  Always a reliable garnish for curry, cilantro is especially good with sweeter Thai curries.  It's got just enough bite to lighten the sweetness a bit.
I'm a huge Jamie Oliver fan because although I appreciate the nutritional emphasis of his cooking, I appreciate even more the simplicity of his recipes and that he proves that real, good food can be made with simple ingredients in a short time (if necessary- slow food is good too!).  The rice recipe is his and as per usual, elevates a typically boring dish like rice, to new heights.  Good with most stir-fries, if I had had the ingredients for a Thai curry with coconut milk, it would have been my first choice for a companion.  This recipe is also good with Mexican dishes, as the lime brings the brightness I associate with the spices from that part of the world.

Anyway, if you weren't aware, I have recently take on the venture of a chicken CSA (there's still a couple shares left!), so I had some fresh tenders in the fridge that were in need of cooking and they were calling out to those glorious snow peas (that I feel I can appreciate since I helped picked them last year and know the feeling of seemingly hours of picking only to have the bottom of the trug barely covered).  So I made this quick chicken and snow pea stir-fry and served it over the Cilantro Lime rice.

Cilantro Lime Rice
(Basmati is my go-to rice, but you could use most any kind with this recipe.  The key to keeping the basmati from getting sticky is to resist the urge to stir it as it cooks, or while it's cooling.  Just trust that it will do it's thing.)
So, cook the rice. (Whatever quantity you like)
Chop up a big bunch of cilantro (again to your taste, whatever quantity suits you best)
2 limes (who keeps limes on hand!?  This is what the recipe calls for, but I always just use some good quality lime juice that I have in the fridge).  If you DO have limes, be sure to use the zest and the juice.  This can be a lot of juice, so start with one lime (or a glug of bottled juice) and add to your taste from there.

Jamie says to add the cilantro and lime to the rice, drizzle over a glug of olive oil (he can't make anything without some evoo, but I think you can get away without it here if you don't have any on hand) and then season with salt and pepper as you see fit.

Very simple, but adds so much to otherwise plain ol' rice.  In the chaos that is mealtime here, I failed to get a picture of the rice, but you can probably picture white rice with lots of green flecks. :) 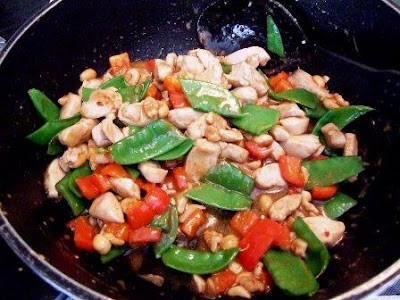 My stir-fry was pretty basic and quick (as stir-fries should be), but if you're looking for a nice, go-to home made sauce, this is an easy one:

1 tbsp. Bragg's soy seasoning (this is a great GMO-free alternative to regular soy sauce- find it in the natural section at the grocery store)
1-2 tsp arrowroot starch (typically this is cornstarch, but I don't trust the corn to be GMO-free so I've adapted my recipes to use arrowroot starch instead-also found in the natural section of the grocery store.  It's nearly the same as cornstarch, but can get a bit gelatinous if there's not enough liquid with it, or it heats too quickly.)
1 tbsp. sugar
3 tbsp. broth (or usually water, since WHO has 3 tbsp. of broth around!?)
If I have hot sauce, a dash of that could go in, but usually I just toss in a big pinch of red pepper flakes for some heat.  Cayenne pepper would work too.

Wisk that together and have ready to add to your stir-fry ingredients at the end of cooking.

The other two key ingredients are garlic and ginger (fresh or powdered), which should cook along with the ingredients from the start.

In mine, seen here, I had chicken, snow peas, red pepper, peanuts and walnuts.  Cooked the chicken first, set aside, very quickly sauteed veggies and then combined everything with the sauce.  Voila.  Not the BEST companion with the cilantro lime rice, but better than plain rice for sure. 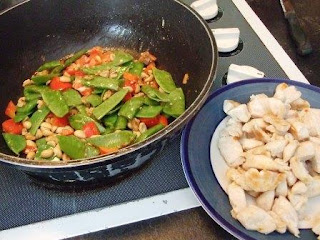 If you're one of those people who just simply hate cilantro- don't feel guilty.  Apparently you have a genetic variant that causes it to taste like soap to you, so it's not your fault!  It's sad and unfortunate, since you're missing out, but not something you can help.  Go chop up your basil and do something fantastic with that instead.  Give your cilantro to a genetically unvariable neighbour and maybe you'll get something great and unsoapy in return. :)

Sally
* We are Mark and Sally Bernard and along with our kids, Lucy, Wilson, Thayne and Sol, we own and run Barnyard Organics, a certified organic grain and livestock farm in Freetown, Prince Edward Island, Canada. We believe in real food, and that putting soil health first leads to overall health for our crops, our animals and ultimately our customers. Come along as we share the successes, challenges and love of farming and love of cooking that come with real organic agriculture in today's world.